Skip to content
Posted on September 13, 2016November 11, 2016 by dadsense Posted in Uncategorized

​It’s been weeks since I’ve posted, sorry about that.  Life has been moving at warp speed since the Wee Baby T hit his 2 month mark, and work has been in overdrive.  Still, as Benjamin Franklin once said “He that is good for making excuses is seldom good for anything else.”

With that, a recap:

We pick up the car at noon and hit the road.  What amazed me was for such a tiny person he had so much to pack!  While I would have typically rented a compact, I decided it might be best to go with a full-size this time.  Good call!  The stroller barely fit in the trunk, and left precious little space for his pack & play and 2 suitcases.  In hindsight, I think the Chrysler 200 might actually be a mid-size. 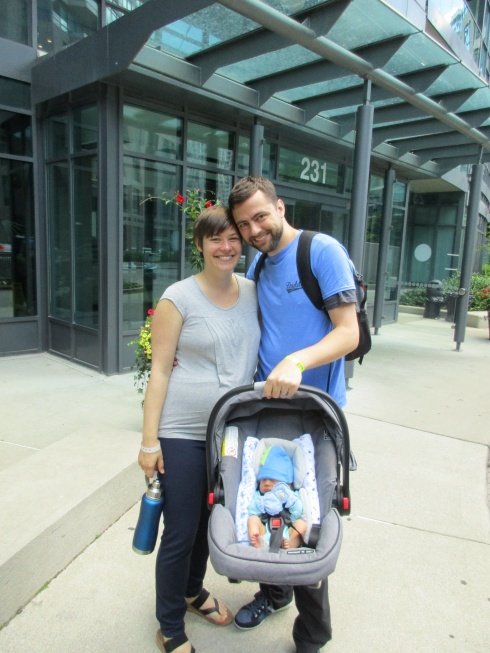 After some clever packing, I turned to the car seat.  I have installed this car seat many times in my parents 2001 SUV, which doesn’t have the LATCH system, so lots of struggling with the middle lap belt.  The Chrysler on the other hand was brand new.  I have to say, the LATCH system is brilliant! Clip, clip, tug, done.  Load the car up with Twizzlers and Rock Star and we’re on the road!

To be honest I feared the worst.  When we were young my sister was notorious for getting carsick.  I get ear infections every time I fly. K can’t be on a boat for more than 20 minutes without turning sea-green herself.  We are not a family that travels well.  You may think “well every kid gets carsick from time to time…” no, I mean we couldn’t drive 10 minutes to the grocery store without bringing a bag, just incase.  Our family vacations would typically start with Dramamine and end with my sister throwing up regardless.  A typical exchange between my dad and my sister:

It got to the point that if my sister said “Uh… dad?” my dad would swerve across 2 lanes to get to the shoulder and hammer on the breaks.  Oh good times.

Back to the present – 5 minutes after we pulled out of the driveway T was out like a light. At 12 lbs he is still a little small for his car seat, so his head listed quite a bit to the right (easily corrected with a rolled-up burp cloth), and it took me some practice to adapt my driving style to having a child in the back.  I feel like I’m a safe driver, now I just need to take it easy at red lights 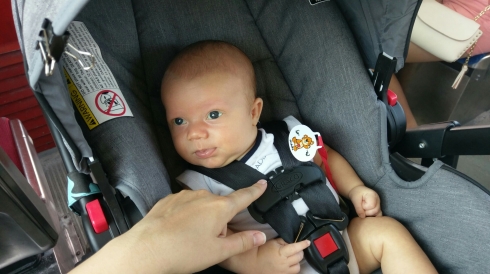 All in all, a great trip.  The Graco Sungride 35 Click Connect was perfect for keeping T safe and getting him in and out of the car was a breeze.  Paired with the stroller, this is a great travel system.  The blind spots on the 200 are a pig though.

8 thoughts on “Riding in Cars With Infants (and other things as well!!)”